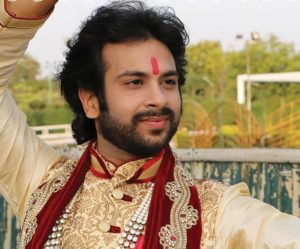 Devesh Mirchandani is a Mumbai based choreographer and dance teacher. He is a member of the Indian Film and Television Association Bollywood and part of the choreography team “Dance with Madhuri”. His dance training includes Indian Folk Dances, Kathak and Contemporary – Bollywood dance.

As a teacher, he has been offering dance lessons in India for sixteen years whereas for the last three he has expanded his activities internationally – having travelled to countries like Russia, Spain, China, Taiwan, Malaysia, Colombia, Peru, Chile, Paris, Dubai for workshops and shows.

He has participated in commercials for well-known brands and is also known as a celebrity dance trainer.

His YouTube channel is followed by 400,000 subscribers and his videos have been viewed more than 75 million times in total.

His adaptation of the popular folk dance that is shown in his Ghoomar video – holding currently almost 3 million views, has gone viral and was played on the Indian news channels.

More of his choreographies have gone viral, such as the ones for the very popular Bollywood songs Udi Udi Jaye and Lovely.