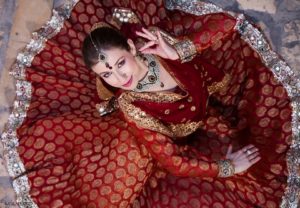 Kinga Malec (born in 1988, Warsaw, Poland) is a Polish dancer and choreographer of Indian dances as well as artistic director of IPCC (Indo-Polish Cultural Committee).

From an early age she was fascinated by dance and music. She started at the age of 5 by training figure-skating and classical western ballet dance. Along with ice skating, she has been dancing also traditional Polish folk and national dances with the ensemble Varsovia. During twelve years of her membership in Varsovia she has toured in many european countries.

In Poland she works as a dancer, instructor and choreographer of Mohini Dance Group. Kinga teaches kathak, bhangra and bollywood dance at Mohini Dance School in Warsaw as well as at numerous workshops in the country and abroad. She’s judged Indian dance competition at Shakti Shine Oriental Dance Festival in Vilnius, Lithuania and 2 editions of Shades of Orient Indian Dance Festival in Poland.

She cooperates with with artists like Dr. Maria Pomianowska and her Ensemble Polonais, Sandesh Popatkar, Avaneendra Sheolikar, Giridhar Udupa, Miguel Czachowski and his flamenco-Indian ensemble Indialucia. With her Guru Nirupama Rajendra she had a privilege to perform at International platforms like Samarpana – The Asian Festival of Classical Dance in Singapore in 2014 and during many various festivals in India. She is regularly being invited to perform at the Polish TV (for ex. Finale of XXth Polish ‘Dancing with the Stars’ 2017), TEDxWarsaw 2017 and radio. She also took part as a dancer in Shandaar bollywood movie (starring Shahid Kapoor and Alia Bhatt) partialy shot in Poland.

She is the winner of European Next Bollywood Dance Star Contest 2015 in Frankfurt Germany, judged by legendary choreographer Saroj Khan.