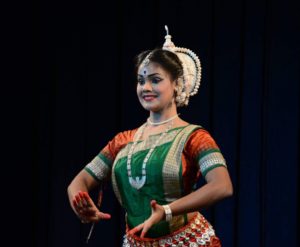 Blessed by the divinity, Ms Prashanti Jena is but grace and elegance personified. A disciple of Pandit Guru Sri. Rabindra Kumar Swain , she has done her masters in Odissi classical dance in 2008 and currently she is continuing odissi dance under the guidance of Guru Smt. Sujata Mohapatra.

Awarded with titles like “NRITYA NAIVEDYA”, “ODISSI PRATIVA”, “KALAKAR SAMMANA” etc. in various dance festivals and performances, she has time and again proved herself as one of the most talented and recognised faces in the arena of dance. Her lists of achievements in various state level, national level and international level competition is unending. She has also performed on many reputed stages like Amaravati Nrithyotsav 2016, PATOTSAV, Odissi Dance Recital at Marigold Balaji Temple Premises Pune and National Youth Wing Festival (2009) Mount Abu, Rajasthan.

She has attended the training in Odissi Classical Dance form under the guidance of Guru Ratikanta Mohapatra and Guru Sujata Mohapatra from SRJAN, Guru Kelucharan Mohapatra Odissi NRITYABASA (2007, 2014,2015), the Workshop in Kuchipudi Dance form from famous international dancer Smt. Srimoyi Vempati (2013) held at NITR, organized by Kalabhumi in institute of Bharatanatyam and perfoming arts at Rourkela and the Workshop in Odissi Dance form under the guidance of Guru Smt.Sujata Mohapatra (2016) held at Sparsh Studio for Performing Arts at Kolkatta. She has also worked as a dance instructor and dance teacher in INS Chillika . Also she has choreographed beautiful pieces in the various cultural fests of NITR.

Her dance has been appreciated and acknowledged by many, the critics and the commoners, the audience and the judges alike. Her simple and modest personality is reflected as the honest artist that she is.