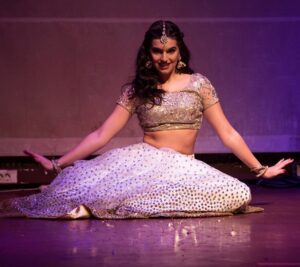 Iro-Eleni Dede was born in 1998 and grew up in Athens. She is a student of the School of Fine Arts. Her first contact with dance was in 2012 with Zumba. In 2014 she started Bollywood dance at the “1st Bollywood Dance Academy Greece”. She has participated in the “Bollywood & Multicultural Dance Festival” for six consecutive years. She has also taken part in the 5th and 4th “International Dance competition in Greece” having been awarded the 3rd and 2nd prize respectively with her own choreography.

In 2019 she was certified as a Bollywood dance teacher by the CID (International Dance Council).

She has taken part with the members of the Academy in the Bollywood movie “Tere Mere” as well as with the professional dance group in “Greece Has Talent” – 2017 and in various TV presentations and shows.