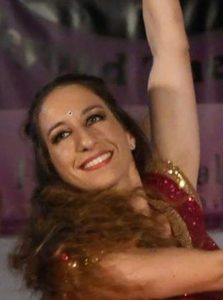 In 2019, she received her diploma as a bollywood teacher, from the 1st Bollywood Academy in Greece.

For several years, she was also involved with acrobatic gymnastics as a member of the Acrobatic-Dance Team of Lycée Leonin of Nea Smyrni, Greece, and as a member of the Dance Team Faceless, participating in national, European and international festivals and competitions in Greece and other countries. She has performed in big theaters in Greece, such as Herodion and Megaro Mousikis in Athens.

She has been taught ballet and modern dance, in which she has received diplomas. She has also been taught contemporary, funky jazz, tango, capoeira, bollywood.

In addition, she has studied chemistry at the National and Kapodistrian University of Athens, Greece, with a postgraduate degree in Newcastle, England, on “Medicinal Plants and Functional Foods” and has worked as a chemist at a Greek pharmaceutical company.

Other interests: piano, hiking in the nature, theatre, kayak, travelling.