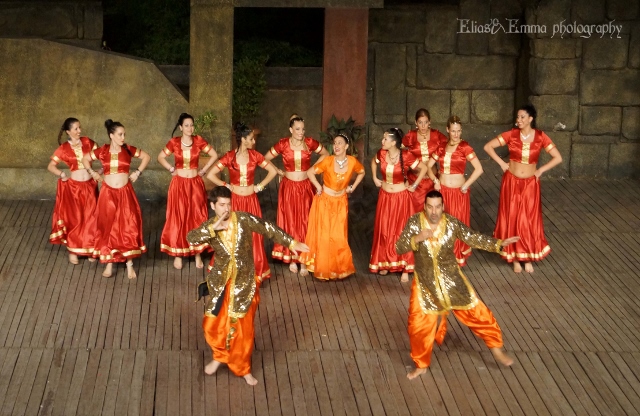 Flood of people at the 2nd Bollywood and Multicultural Dance Festival

Amazing moments at Dora Stratou theatre, an ‘oasis’ of culture
in the center of Athens

The participation at the 2nd Bollywood and Multicultural Dance Festival surpassed any other previous matter where not only the seats of Dora Stratou Theatre were overfilled, on Saturday and Sunday 21 & 22 June, but they all danced together at the end of the Shows. With the participation of almost everyone in the audience and of the 200 dancers the show turned into a large flash mob, that made the whole theatre “pulse” in the rhythms of Bollywood Music.

The highly anticipated festival attracted hundreds of friends of dance, who enjoyed high quality moments and combinations of different dance and music styles, that united cultures. The dancers from America, Portugal, Turkey, Armenia, Italy, Spain, India and many other countries and Greece, impressed with their dance performances. Especially for the Festival events many original choreographies were prepared and executed.

For the first time in Greece, in the limits of the festival, an International Bollywood Dance competition was organized and several awards and distinctions were received. The First prize was won by “D(on’t) S(top) D(ancing)”, the second by “Bonfire Crew” of the Boogaloo dance school and the third by the dance team “Keep Dancing”. The awards were meted by the President of the International Dance Council (Conseil International de la Danse) CID – Unesco dr. Alkis Raftis, the 1st Secretary of the Indian Embassy Mr. Rack Verma and the Vice-president of the Indo – Hellenic Society for Culture and Development Mr. Antonis Papadopoulos.

«We have experienced intense moments with our guests from Greece and abroad. We thank the Ministry of Culture and Sports and the International Dance Council (CID-Unesco), under the aegis of whom our events took place, as well as all our sponsors for their support in this event that brought together people, cultures and traditions.It was confirmed in this way, our belief that dance unites people and cultures and that there are no boundaries, stereotypes and limits.

We are renewing our “date” with the Athenian public for the June of 2015, at the 3rd “Bollywood and Multicultural Dance Festival”. We will see you then!!!»

Warm thanks to our Sponsors: